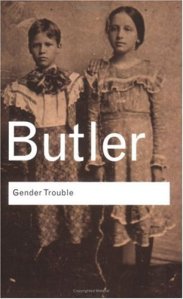 “Ten years ago I completed the manuscript of Gender Trouble and sent it to Routledge for publication. I did not know that the text would have as wide an audience as it has had, nor did I know that it would constitute a provocative ‘intervention’ in feminist theory or be cited as one of the founding texts of queer theory.The life of the text has exceeded my intentions, and that is surely in part the result of the changing context of its reception. As I wrote it, I understood myself to be in an embattled and oppositional relation to certain forms of feminism, even as I understood the text to be part of feminism itself. I was writing in the tradition of immanent critique that seeks to provoke critical examination of the basic vocabulary of the movement of thought to which it belongs. There was and remains warrant for such a mode of criticism and to distinguish between self-criticism that promises a more democratic and inclusive life for the movement and criticism that seeks to undermine it altogether. Of course, it is always possible to misread the former as the latter, but I would hope that that will not be done in the case of Gender Trouble.” (Judith Butler’s preface to the 1999 edition)