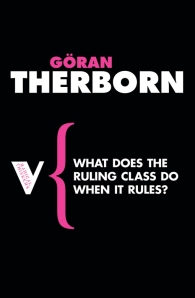 “Two concerns are intimately interwoven in this book: one of
empirical social theory and one of the practice of revolutionary
politics in the advanced capitalist countries. The first essay, dealing
with the state apparatus, owes its conception to the 22nd Congress
of the French Communist Party, at which the concept of the dictatorship
of the proletariat was deleted from the statutes. But it goes
beyond the framework of the political debate that accompanied and
followed that event. Entering the field of organization theory, it
seeks to elucidate the forms of state organization characteristic of
feudal society, the classical and modem Western world, and the
contemporary regimes of Eastern Europe.” (from Science and Politics–A Foreword)

Download: What Does the Ruling Class Do When it Rules?